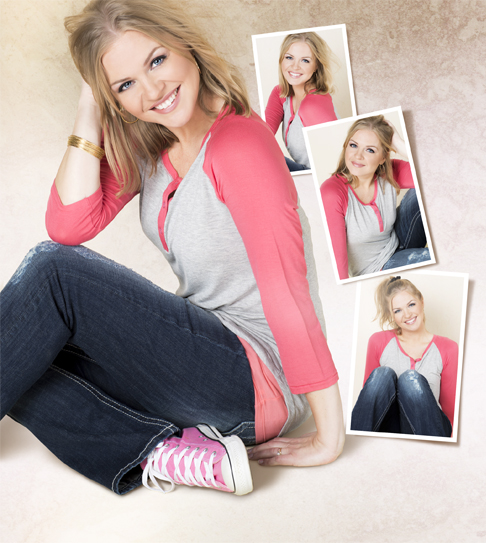 As a lifelong performer who’s finally making her national debut, Stephanie Joy could’ve quite convincingly chosen any of the heartfelt and uplifting messages from her new EP as inspiration for its title, but none is really more fitting than the brief, bold and multi-layered statement Walk Your Road. For starters, the current singer/songwriter with a bubbly personality actually began her time in the spotlight as a mere child, worshiping and performing in plays at her father’s church, followed by commercials for Best Buy, Pop Tarts, Cost Cutters and even landing on the cover of a Cheerios box! It’s no wonder the Minnesota native soon scored starring roles in regional Broadway musicals such as “Annie,” “Peter Pan,” “Cinderella” and “The Music Man,” along with serving as president of her senior choir and touring all throughout Europe as part of an all-state woman’s choir, but just as the lifelong believer was about to make the leap to the next level, she made a conscious decision to truly walk the walk of her beliefs rather than merely talk the talk. “Not too long after I got married, I won a leading role in a movie and it was really a dream come true for me. However, when I got the script and read it, my character would have to do things that conflicted with my beliefs as a Christian,” recounts Stephanie. “So I had a choice to make. I was either going to walk the road of following Christ or I was going to compromise my beliefs and go another way. I had been speaking to girls all across the country on virtue and what it means to be a ‘virtuous woman.’ I didn’t want to tell them how to live their lives and then go out and be an example to the contrary, nor did I want to be a part of a role and in a movie that I wouldn’t even want my own husband to see, so I made the choice to turn it down and walk away. The moment you begin to compromise your beliefs is the moment you lose who you are.”

A brave and bold Walk Your Road moment indeed, and as Joy resumed touring with her husband, another extraordinary door in the entertainment industry opened even wider, and this time, the pieces fit perfectly. “After traveling around the country for several years playing music and ministering to teens, especially to teen girls, a contact was made with a man from Geffen and Warner Brothers who recommended that we work with Grammy-winning producer Val Garay,” she continues. “Val has worked with artists such as James Taylor, Kim Carnes, Dolly Parton, Bonnie Raitt, and Bette Midler, just to name a few, and particularly worked well with women, so we knew this would be a great opportunity for us and bring our music up to a whole new level. We flew out to California to meet Val and he listened to our music and to my singing and decided to take the project on.”

Throughout the resulting Walk Your Road, Joy is committed to encouraging and meeting listeners exactly where they are at, while also making sure they knew exactly where she stands. And considering she’s always been a fan of powerhouse Christian vocalists with meaty lyrics, this relative newcomer to the studio also swung for the fences in terms of her sincere delivery and songwriting, a process she relates to “running a marathon” that proved so fruitful, it’s already spawned ideas for her follow-up project.

“When you walk into the studio of a man who has about a hundred gold and silver records all over his walls, you know you’re stepping in with the ‘big boys’ so to speak and that’s exactly what it was like, but also that you were in good hands,” she unveils. “Val really ‘minted the gold’ per se and brought quality out of me. Being in the studio was both a privilege and a challenge. Excellence is always the goal and key. You never want to fall short of that, even though you know you will have to work hard and be willing to be perfected to get there. Val took Stephanie Joy Music up to the level of what only a producer of his quality and caliber could do. His excellence and heart for the project could be seen to the very end as he made sure that everything to the last detail was done to perfection. It doesn’t get better than that and we all feel we have something really special here.”

The title track is one of the most immediate examples of exactly that given its no-nonsense, contemporary pop approach, alongside a reminder to always stand firm in faith. As has been the case in her own career, it’s not always the easiest choice, but by far the path that will always yield the most positive results.

“‘Walk Your Road’ really speaks to the kid in school that’s having a hard time- the kid who maybe wants to fit in and be popular, but knows that he or she is not going to take part in and do the things that all the other kids do,” says Stephanie. “You’ve got to walk your road just as Jesus did and do what you know in your heart is right, even if it means walking it alone. It will not be easy, but then again Jesus dying on the cross for our sins wasn’t easy either. We have to choose whom we are going to serve, and for true Christians, it’s either going to be the Lord’s way or the way of the world. You and you alone must decide, as we will all give our account before God one day on our own.”

“Letting Go” also paints another extremely relevant life lesson and that’s simply to surrender a crisis, relationship or season of testing to the Lord, who will always steer the situation and calm the storm in His perfect timing and infinite wisdom. Then there’s the surefire sing-a-long “V-I-R-T-U-E,” inspired by that very same aforementioned class Joy gives to thousands of girls across the country and strives to live out on a moment by moment basis.

“It comes directly from Proverbs 31 and talks about the definition of what the word ‘V-I-R-T-U-E’ really means and what it means to be a ‘virtuous woman,’ which God has called all of us women to be. It shows girls the other side of the spectrum from what they are taught today, but it’s still a fun song that’s very upbeat and will really get you movin.’ I also need a little bit of that ‘let’s just have some fun’ music in my life!”

In addition to general enjoyment, any tune that gets the blood pumping surely helps Stephanie get through her whirlwind schedule and fascinating family life that also adds another unique ripple in the Walk Your Road theme. Not only do Stephanie and her husband travel together for their extensive concert and speaking schedule, but so do all four of their boys, who get homeschooled as the tour bus rolls down the road!

“Our family is not your typical run of the mill kind of family,” the matriarch lets out with a long laugh. “If you spend even an hour with us you will see that is true. We do everything, together. We travel together, do ministry work together and always say, ‘you don’t get one of us, without the rest of us.’ It is hard trying to balance everything with all we do in ministry and music and with all the different hats I wear. To be very candid, it’s like running around like a chicken with your head chopped off most every day, but the good thing is we’re all in this together and our children get to take part in this journey with us as well, so we are very blessed.”

There may be a hint of humor to the response, but Joy’s openness in this unconventional case and so many other interactions makes her remarkably relatable to so many she meets on a daily basis, plus a sizeable grassroots following online that continues to grow with each season of her burgeoning ministry. And at the end of the day (as exhausting as they sometimes may be), she hopes everyone she meets personally, virtually or musically will come away with a renewed sense of self-respect, courage, and ultimately, truth.

“My prayer is that this music will give people hope for a new day and the reassurance that they are doing the right thing by walking their road while staying true to their convictions,” she declares. “I want Jesus Christ to receive the glory from this album and minister His truth to everyone right where they are at as only the Spirit of God can do.”